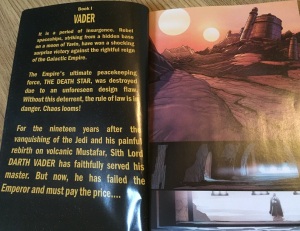 As opposed to ‘Rogue One’ there is an openingscrawl here.

‘Star Wars: Rogue One’ – now in cinema’s is a prequel to ‘Star Wars Episode IV – A New Hope’. It isn’t the first live action movie that is not part of the official series (another live action spin-off is ‘The Star Wars Holiday Special’ (1978) – a film the producers rather forget about completely). It is however the first decent movie outside the episodic structure: a real cinematic ‘Star Wars’ experience. Outside of cinema however, there are millions of spin-offs in the form of comics, cartoons and novels. The quality varies.

A recent example is the Marvel comic: ‘Darth Vader: Vader’ (2015). If ‘Rogue One’ is episode 3,5 (or rather 3,9 since it ends where ‘A New Hope’ begins) than ‘Vader’ (couldn’t they think of a better title?) is episode 4,5 (or IV S in Roman numbers). It looks at events from the perspective of the Dark Side, which is off course a cool place to reside.

After the surprise victory of the rebels and the destruction of the Death Star, the emperor has been searching for a replacement for Vader. But since there are no Jedi’s anymore (yes Luke, but the emperor doesn’t know this yet), he has turned to robotic technology. It is up to Vader to prove he is still a worthy servant to his master. The way of the Sith is one of strength after all. A great visual style and dialogues worthy of Vader make this a decent comic for the fans. I think they’re pushing this spin-off business way too far, but then again: when you get the chance to see the greatest super villain duo of all time in action again, who’s complaining? 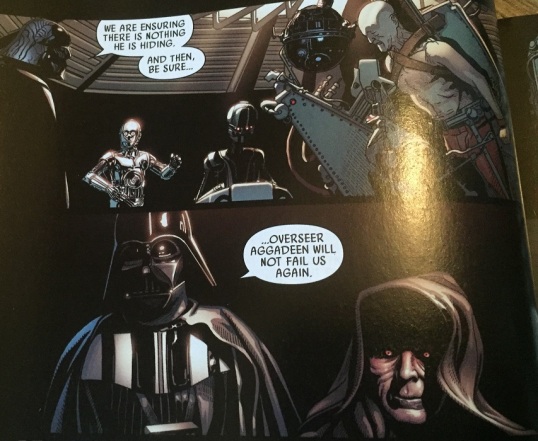