George A. Romero, one of my favorite filmmakers, has died after a short battle with lung cancer, Indiewire reports. Almost singlehandedly responsible for the zombie genre in its current form, Romero directed ‘Night of the Living Dead’ and its many sequels, most notably the consumerism allegory ‘Dawn of the Dead’ – my favorite horror film of all time.

Romero (born 1940, New York), who resided in Pittsburgh, made his feature debut with ‘Night of the Living Dead’. It was a low budget zombie movie that was both groundbreaking and shocking in its time. Quickly, it became a major horror classic. He then directed some smaller, personal films in which he often combined horror and social commentary. In 1978 he topped the success of ‘Night’ with his brilliant follow-up ‘Dawn of the Dead’.

In the eighties his career stagnated a bit when he created the third part in his zombie series ‘Day of the Dead’. It was a failure both commercially and critically. In 2005 Romero made a small comeback with ‘Land of the Dead’. Other noticeable films he made are ‘Martin’ (a vampire flick) and ‘the Crazies’ (an outbreak film).

To honor the master, I hereby re-publish my review of ‘Day of the Dead’ which he considered his favorite film.

Dear George, may you – as opposed to your favorite characters – rest in peace. 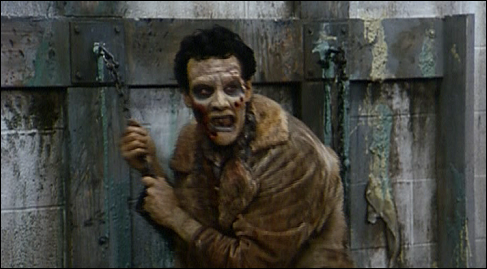 In George Andrew Romero’s NIGHT OF THE LIVING DEAD (1968) the dead had been resurrected and started a crisis. In DAWN OF THE DEAD (1978), the zombies were taking the upper hand. In 1985’s DAY OF THE DEAD, there are barely any humans left. A small group of survivors consisting of soldiers, scientists and civilians, are holed up in a military complex with hundreds of flesh-eaters roaming around on the outside.

There has been a time leap since DAWN, so the zombies are slowly decomposing and are looking greyer and greener than in the previous ‘Dead’ movies. The different groups living in the claustrophobic complex are each dealing with the situation in their own way. The scientists are searching for a way to ‘control’ the zombies, while the soldiers want to wipe them all out. The few civilians on the other hand, just want to enjoy the time they have left. Lack of any prospects starts to create tension in the group. Especially with the psychopathic Captain Rhodes (Joe Polito) who commands the small military force. Not before long, their infighting leads to a final clash with the zombies. Romero shows us once again that humans are a greater danger to themselves than any outside threat.

Romero called DAY his favourite entry in the series, even though it was derided by critics upon release. Today the film has got more of a cult status. And justly so. As a film basically showing total apocalypse, it succeeds brilliantly. Only problem is that it’s pretty depressing. From Dr. ‘Frankenstein’ Logan conducting gruesome experiments on zombies in his underground lab to the unpleasant characters: it all contributes in making this film pretty hard to sit through. In DAWN, the shopping mall location lend itself well for some inventive humor. The funniest thing about DAY is the ‘intelligent’ zombie Bub who even utters some dialogue in the film (A..llli….ciaaaa…).

In short, Romero’s golden touch, the fantastic special make-up effects by Tom Savini and the dark atmosphere make this a must-see for horror fans. The successful military satire is another good reason to see this. However, dejected types might be better off not watching this. Like the other ‘Dead’ films its concept may well be brilliant, but it is still a nasty and depressive movie. Twenty years later Romero would continue his series with LAND OF THE DEAD.