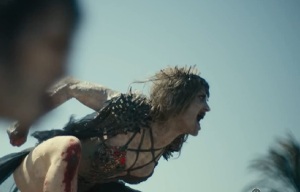 When the great zombie revival began with Danny Boyle’s 28 Days Later (2002), director Zack Snyder (300, Man of Steel) was one of the first to capitalize on it with a remake of Dawn of the Dead (2004). His innovation: running zombies. While it took some getting used to, it added to the suspense. In Army of the Dead, another breed of zombies is introduced: the Alphas. They’re some type of intelligent zombies. While the master of the genre George A. Romero experimented with this idea in Day of the Dead (1985) and Land of the Dead (2005), the Alphas are definitely the most advanced flesh eaters yet. They can communicate, they can hunt every effectively, and I’ll admit: they’re pretty creepy. There are also ‘normal’ zombies present in this apocalypse by the way.

The pandemic occurred in Las Vegas this time, and the US government managed to maintain it within the city borders. As they are about to nuke Vegas, a group of mercenaries go in to steal 200 million dollars from a casino safe before the city is destroyed. These bad asses have to deal with normal zombies, Alphas and double crossers amongst their own ranks. As can be expected, Snyder throws in his usual visual eye candy, and admittedly, Army of the Dead looks pretty stunning. Unfortunately, it appears as though they’ve fired their continuity officer before the shoot began. There are a bunch of really major errors, even for a film of this kind. However, a campy story like this is too delicious to resist and the largely unknown cast definitely do a great job. There is also no lack of gory zombie extermination action and funny side gags along the way (this is Vegas, so an Elvis zombie and tiger zombie – from Siegfried & Roy – are present). Snyder is having a good time again and it shows.

Army of the Dead is now available on Netflix

The verdict: to stream or not to stream? To stream.