After the terrific second season, I thought it was over for the chainsaw wielding Ash and his compadres. But my favorite show of the last couple of years returned for one final round of evil ass kicking. April this year, Starz announced it was now cancelled due to a drop in viewers. Bruce Campbell had this to tweet about it:

So now it’s over for real. But with a legacy this good – three movies (not counting the inferior remake) and three TV-seasons, who’s complaining?

Season 3 starts off with a brilliant commercial in which Ash, retired as a demon-killer, now slashes prices instead of zombies in his new hardware store. Off course, it doesn’t take long for evil to return. And if that isn’t enough, he finds out he is a dad. Will his daughter Brandy turn out to be an evil asskicker, just like her daddy ‘Ashy Slashy’?

The usual ingredients are all here: slapstick humor, buckets of gore and dazzling camera moves. A definite highlight is the battle in a sperm bank (in episode 2), where Ash has been donating his superior seed for quite a while. It is in over-the-top scenes like this when the formula of laugh out loud humor and gory horror shocks is at its most effective.

Like in the previous season, Ash gets excellent support from Pablo and Kelly (Ray Santiago & Dana DeLorenzo) who really managed to become essential characters in the revived Evil Dead Universe. Lucy Lawless makes a strong main villain as Ruby, one of the original Dark Ones who wrote the Necronomicon and thus started all this deadite trouble. We meet the other Dark Ones as well this season for the first time! And does Ash get to fight that big ass monster that’s on the awesome cover above? Find out for yourself. This show is not to be missed.

I wish Bruce Campbell a happy retirement. Ash – a guy with a chainsaw as hand – has been the role of his lifetime. As King of the B-actors, he couldn’t get a more suitable legacy. This is the stuff of true legends. 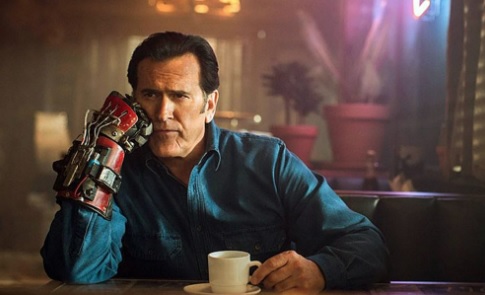 Ash can finally lock away his chainsaw and boomstick.