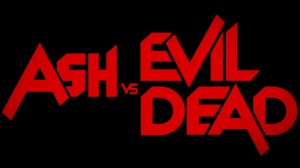 Ash is back in Ash vs Evil Dead

Ash: man, I missed this guy! Bruce Campbell is back in the role that made him King of the B-actors. And he looks as good as ever and his humour is still as dry as a bucket of Sahara sand. In 23 years (since ‘Army of Darkness’), he hasn’t changed much. He still has a lousy job in a store as stock boy, he is still picking up chicks, and he still has his chainsaw and boomstick lying around for emergencies. And they’re needed, because it takes only 10 minutes before Evil shows up. Bigtime…

So what are the best moments in this epic first season? (spoilers obviously)

Ash has looked deep inside himself with a guided ayahuasca tour and found the core of his being: whatever you do, don’t think. Ash is most effective when he doesn’t think at all and that’s how he defeats the horrible demon Eligos.

When Ash goes back to the cabin, the place where it all began, the series goes back to its roots also: nerve wrecking terror. He faces several evil entities including some evil kid (‘someone needs to wash your mouth kid and that someone is me’). But equally great is his fight against another Evil Ash. He is often his own worst enemy. Luckily Good Ash always has some tricks up his sleeve.

Ash takes on the possessed Vivian – his trailer park neighbour. It is in this classic battle that Ash is reattached to his beloved chainsaw plus he gets to use his BOOMSTICK! “Yo granny, hope you took your Geritol. Because it’s time to dance”.

2. Summoning up a Total Nerd

Ashley Williams is at his best when he’s acting like a complete idiot. Like the time he purposefully wants to summon a weak demon to get rid of evil.
Ash: Lionel, have you found a wimpy demon yet?
Lionel: I have found a minor demon named ‘Eligos’. Possesses knowledge of hidden things. A demon of the mindscape.
Ash: Well perfect. Sounds like a total nerd. Okay, get him out.

When Eligos appears it doesn’t look much like a wimp. Classic Ash.

Ash messed up things before, but how he manages to summon up demons this time must be his greatest (and funniest) fuck-up. Ash is getting high with a hooker and she tells him she finds poetry so damn sexy. Ash says he has something lying around. It may not be French, but Necronomicon Ex Mortis (which he keeps in his house because…?) will have to do. Soon they’re citing passages and laughing their asses off. Superb comedy.

Can’t wait for the second season. Loved this one.

Raimi, Tapert, Campbell: bring it on!