Phil declares war on Tony’s ‘glorified crew’, motivating his decision by stating that Jersey doesn’t live by the old mob standards anymore, ignoring the fact that nobody does and the mob is all about the money. Great scene, for the dialogues but also because it makes the tension level rise sky high. You know an old school mob war is about to break loose and anybody could get hurt. All bets are off now and the adrenaline is rushing through our bodies.

You gotta love how Tony handles this one. The widow Angie Bonpensiero is on Tony’s payroll since Pussy went MIA (whacked), but she’s still crying money problems to Carmela. When Tony arrives to sort it out, he sees that she is driving a Cadillac. His anger management lessons go straight through the window then and there. He takes a Louisville slugger from his car and takes out his frustration on the caddy. He then tells the frightened Angie: “You see my wife, you talk about oven cleaners. Anything else you come directly to me.”

The postmodern movie references are one element in making The Sopranos a great show. The best one appears in this scene. Christopher feels depressed because of his low ranking status in the mob, so he starts acting like a cowboy. “What is it, do I look like a pussy to you?”, he asks a bakery clerk who doesn’t, in his view, shows him the proper respect. Then he shoots him in the foot to teach him a lesson. The same thing happens to Michael Imperioli (who plays Christopher) in GoodFellas. He gets shot in the foot by Joe Pesci for forgetting to serve him a drink. Therefore Christopher’s reply to the clerks; “Arghh, you shot me in the foot”, is all the more hilarious. “It happens”, he says before walking out the door. Genius! Ps: That customer whom Chris sends away is indeed Vito in a different role.

This little dialogue between Junior and Livia feels like a scene from a Roman tragedy like I, Claudius in which – not accidently – the evil mother character is also named Livia. During their drive to A.J.’s birthday party, Junior feels out Livia about a possible hit on Tony. First he pisses her off a little: “Remember the long hair and the drugs? Now, it’s fags in the military”, and then he says that “something may have to be done about Tony.” She doesn’t say anything! Brilliant set-up for one of Season 1’s major plot lines. 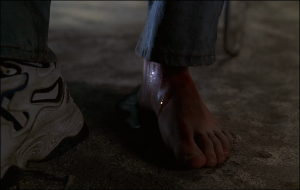 Episode: From Where to Eternity (SE2, EP9)
Characters: Tony, Pussy and Matt Bevilaqua

With Christopher almost shot to death, Tony is keen on revenge. This is an opportunity for FBI-informant Pussy to prove himself. He tracks down Bevilaqua and takes Tony there to whack him. Matt is understandably scared of what is coming, so he pisses his pants. After a brief interrogation, Tony finishes him off with a shot in the head. Matt is crying for his mother before the end. Then Tony and Pussy send out a message and pump Matt’s dead body full of lead. Afterwards, they go celebrate with a steak meal.

Ralphie figured it was Paulie who told the Ginny Sack joke to Johnny Sack. He calls Green Grove to get back at him. Paulie’s mum answers. Ralphie: “Hello, Mrs Gualtieri, this is detective Mike Hunt, Beaver Falls, Pennsylvania Police Department. We found your son in a public men’s room in Lafayette Park. I don’t know how to put this delicately; he was sucking a cub scout’s dick.” He goes on for a while and has everyone in stitches. Including the audience. Too bad Ralphie goes this episode; he is one funny motherfucker.

While Carmela claims that Tony Soprano is not ‘a vindictive man’, he still sends out Bobby to commit his first murder because he kicked Tony’s ass in a fist fight a couple of days earlier. The murder scene is delivered in quite a dramatic way; Bobby is obviously upset and his victim – a young guy – is seen badly suffering. A clever detail is that the first bullet ends up in the Laundromat and is heard quaking around till the end of the scene.

Fresh from Naples, Furio is given a first assignment by Tony. He has to straighten out the owner of a bordello and his insubordinate Filipino wife. He passes the test. Within a minute, he has caused more physical damage, pain and fear than any of the other guys would have achieved. Tony is enjoying himself in the car while he listens to the anguish inside. Then Melfi calls that she wants to take him back as a patient. How appropriate. 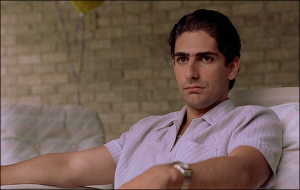 This is a beautiful early moment in the relationship between Tony and Christopher where everything is still peaches and cream. Chris is unhappy because Tony did not compliment him on solving the Triborough Towers situation (the hit on Emil Kolar). Instead of kicking his ass, Tony understands. He has gone all soft because of the therapy he has been having. “That’s how I was parented, never supported, never complimented”, Tony says. Very soon after, Tony explodes anyway after Chris starts babbling about writing Hollywood screenplays. “You gonna go Henry Hill on me now?” Then they makes nice again. “Everything is gonna be alright from here on in. What could be bad?” Well, with these highly unstable characters, quite a lot.