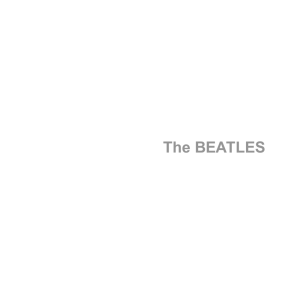 In the documentary The Beatles Anthology (1995), the three then still living band members discuss their recording history at Abbey Road. The non-Beatle with the greatest influence over these legendary recordings is without a doubt George Martin, sometimes referred to as ‘the fifth Beatle’. The extremely talented producer and musician offers some interesting comments on the production. Especially about the The White Album – the only double album made by the band (not counting Past Masters) – he has an interesting thing to say. He thinks they shouldn’t have made it a double album, but pick the best songs and turn it into a very good, single album.

The band disagreed. McCartney said that the record was fine as it was, remarking: “It was great. It sold. It’s the bloody Beatles’ White Album. Shut up!” Harrison thought a double album was a good idea to clear the backlog of songs the group had at that time, though he also admitted not all songs were that strong.

Reducing the backlog to a single album would have been quite a challenge though. The group had spent a couple of months in Rishikesh, India, for a course in Transcendental Meditation and written no less than 40 songs. George really developed himself as a songwriter during this period. But Lennon also said he wrote some of his greatest songs in India. The White Album contains many fantastic songs, and the fragmented whole is a terrific mix of genres, like folk, country, blues, ska, music hall and avant-garde. Why would one mess with that?

However, as a thought experiment, let’s consider what a single White Album would be like. Some tough decisions would have to be made. It contains 30 songs, and would have to be cut down to 17 (taking Abbey Road as a measure). Which 13 songs would perish?

At the risk of pissing off some fellow Beatles fanatics, I would get rid of these 13 tracks.

Wild Honey Pie (McCartney)
This is just a curious short McCartney thing. No problem dumping this one.
Why Don’t We Do It in the Road? (McCartney)
It’s alright, but it’s not great is it?
Yer Blues (Lennon)
A dark and moody song by Lennon, but he did better later in his solo career.
Mother Nature’s Son (McCartney)
Off course it’s an okay song, but if you have to choose between this and the remainders, it is really no choice at all.
Glass Onion (Lennon)
This one I like. I like the guitar play and the references in the lyrics. Still, it’s not brilliant.
Everybody’s Got Something to Hide Except Me and My Monkey (Lennon)
The longest title of a Beatle track. Do I love this song? No. So it can go.
Helter Skelter (McCartney)
Now this one is a classic and the toughest decision yet. Sorry Paul. We can release it as B-side to a Happiness Is a Warm Gun single maybe.
Long, Long, Long (Harrison)
Never had much use for this track.
Revolution 1 (Lennon)
What?!? How can you get rid of Revolution! One of Lennon’s best songs. Pay attention please. This is Revolution 1, not Revolution that was released as B-side of Hey Jude. And that is a way better version with one of my favorite beginnings of a Beatles-song.
Savoy Truffle (Harrison)
Sorry Harrison, but I don’t care much for a candy addicted Eric Clapton.
Revolution 9 (Lennon)
Nobody is gonna give me a hard time over this one. It was a weird decision to put it on the album in the first place. Nobody listens to it more than once.
Rocky Racoon (McCartney)
George Martin thought this was filler. I disagree. I think it is a great track. But in exercises like this you have to kill your darlings.
Good Night (Lennon, sung by Ringo)
This one I love as well. Painful to let it go, but I must.

And now, we’re left with the Compressed White Album. I’m satisfied. You can find it on Spotify under jkleyngeld. Check it out.