The Fear Street Trilogy (consisting of Fear Street: 1994, Fear Street: 1978 and Fear Street: 1666) is Netflix’s most surprising release so far this summer. It revives a genre that has been dead for a while now: the slasher. The first scene, in which a girl is stalked in a shopping mall by a skull-face masked killer, reminds of Scream. But soon it diverges from this genre classic by going supernatural. You see, the town of Shadyside is cursed by the witch Sarah Frier, who was hanged in 1666, and is therefore now plagued by possessed killers who go on murder sprees. The bordering town of Sunnyside, on the other hand, is perfectly peaceful.

In the first part, teenage girls Deena and Sam, who are having a sexual affair to please the male audience, have to survive the next rampage and find a way to end the curse. In the second movie, a killing spree occurs during a summer camp in 1978 (yes, very much like the first Friday the 13th). In the third and final film, we first learn the history of Shadyside and Sunnyside through a transcendent experience by Deena. And then, after a major plot twist, it is up to her and her friends to end the terror once and for all. While the first part gets the lowest rating on IMDb, I liked it best, because it has the most old fashioned horror moments. But the whole trilogy, successfully directed by relative newcomer Leigh Janiak, is entertaining throughout. With genuine scares, excellent casting and plenty of brutal kills. This is how you do a slasher.

The Fear Street Trilogy is now available on Netflix

The verdict: to stream or not to stream? To stream.

There was a terrific feature in Empire Magazine last month, especially during a pandemic when all cinemas are shut down and barely any major movies are released. They invited their readers and celebrated filmmakers, like Steven Spielberg, James Cameron and Bong Joon-Ho to share their favorite cinema moments.

They are specifically looking for moments in which the whole audience experienced movie magic. Think Hannibal Lecter escaping from prison in The Silence of the Lambs. Can you imagine the audience’s response when he pulls the face off in the ambulance? I sure can, even though I never saw Silence in cinema. Or the ending in Buffalo Bill’s house where the depraved serial killer is stalking Clarice Starling with night vision goggles? These are memories from filmmaker Edgar Wright (Baby Driver, Shaun of the Dead), who initiated this feature.

Wright: “I vividly recall riotous screenings of A Fish Called Wanda and There’s Something About Mary, the unforgettable sound of massed sobs in E.T. or Titanic, or just the palpable energy of the first weekend crowd of Scream or The Silence of the Lambs, which was so electric, you’d think it could power a city. I’ve been lucky enough to have made a few scenes myself where the crowd have drowned out the next scene because they are laughing or whooping (I’m thinking the ‘Don’t Stop Me Now’ scene in Shaun of the Dead, JK). Such moments are truly infectious, but again, that’s an adjective that needs to be retired for the moment.”

Other notable contributions in the issue are:
– Darth Vader’s dilemma right before he kills the emperor in Return of the Jedi. By Simon Pegg.
– Luke throwing down his lightsaber, also in Return of the Jedi. By Mark Hamill.
– Neo stops the bullets, but the whole film really, in The Matrix. By Chris Evans.
– The tragic reality of Menace II Society. By Patty Jenkins.
– The ear scene in Reservoir Dogs. By Joe Russo.
– And many many more….

My favorite cinema moment by far is The Lord of the Rings. I went to fellowship on opening day and it was a magical experience. You could feel the whole room just be completely absorbed by the wondrous world Peter Jackson and his team had painted on the screen. It was breathtaking. I remember highlight after highlight, but the ultimate audience engagement happened in Moria where the fellowship faces one challenge after the other. When finally Gandalf sacrifices himself to let the others escape, the audience felt like Frodo: totally and utterly defeated. By the time they face the Uruk Hai at the end, the audience was re-energized, and left the room in pretty good spirit, but also sad because of the loss of both Boromir and Gandalf.

The Two Towers even topped this experience. The way it starts is just a master move. Gandalf being pulled into the abyss and falling and fighting the demonic Balrog. Everybody in that cinema went apeshit. After that: one great scene after the other. But the real show stealer of the evening was off course Gollum. Never before had a digital character been so fully realised. Andy Serkis’ performance is mind blowing. He should have won the Oscar for best supporting actor that year, no question. The movie ends at Helm’s Deep and this is a groundbreaking battle scene in terms of pure scale and spectacle. It is the only movie I saw in cinema three times.

Of course, at the moment there are no cinema experiences at all, but the memories remain. And like many of our favorite movie characters, they will return at some point. No question. True cinema moments are magical. There is no substitute.

Checked and double checked. Darlings killed! This is it:

Peter Jackson’s inventive low budget debut film is a delight in gory horror and awesome humor. It’s about aliens coming to New Zealand to set-up a supply chain in human flesh for their intergalactic fast food restaurants. What they didn’t count on was secret agent Derek (played by Jackson himself) and his team! Great to see that the visionary director behind The Lord of the Rings trilogy started his career with this hilarious B-movie.

Back at the old days, they made great films too, you know. And the Universal Monster Movies are not to be ignored when you’re rating your all-time favorite horrors. The beautiful gothic scenery, spot-on art direction, excellent make-up effects, the universal themes, the humor (the monster smoking a cigar!)… The Bride of Frankenstein is the best in its genre and at least as impressive in the time it was made as its contemporary counterparts. Ehhh, which contemporary counterparts by the way?

Greatest moment: The monster and the hermit. 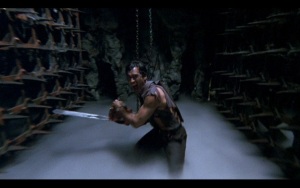 You want some more Evil Dead? Come get some! Ash is back with a chainsaw attached to his wrist and a boomstick on his back. This time around he’s kicking Evil’s ass in medieval times. Isn’t it groovy? Well, yes it is. Besides Raimi’s action-packed script and trademark camera tricks, fans can enjoy a brilliant turn from B-Movie star Bruce Campbell. With his masterful comic timing, loads of one-liners and his lady man skills, he makes Ash a truly lovable hero. Not to mention a horror icon. Hail to the King baby!

This postmodern take on the slasher genre is both an incredible homage and superb addition to the genre. The screenplay by Kevin Williamson is masterfully written and director Wes Craven finds exactly the right balance between suspense, teenage stupidity, humor and extreme violence. Followed by three decent sequels (and a tv-show), but this first one is the best by far.

Greatest Moment: The revelation who the killer is.

The first Predator is an unique movie that holds a very special place in my heart. The concept is fairly simple (mysterious alien hunts and kills soldiers and mercenaries in South American jungle), the execution is flawless. It features the greatest team of warriors ever assembled that faces off against the greatest alien ever created for cinema. It’s just awesome in every way.

Greatest moment: There are many great scenes featuring the predator, but Schwarzenegger’s team butchering an entire guerrilla army is so bad-ass that I have to pick that one.

Two bodies. Two minds. One Soul. Separation can be a terrifying thing.
No monsters or killers are needed to make a creepy film. The human psyche can be terrifying enough by itself. Jeremy Irons gives an Oscar worthy double performance as a pair of twins who become mentally intertwined together. Brilliant psychological horror by master of bodily transformation, David Cronenberg.

Psycho is such an inspirational film that it spawned an entire genre of slasher / serial killer movies. With its groundbreaking narrative techniques and tension building it’s hard to deny the importance of Hitchcock’s masterpiece in cinema history. Janet Leigh is a joy to watch and so is Anthony Perkins in his lunatic performance.

Greatest moment: The shower scene off course, which is completely shocking to this day. 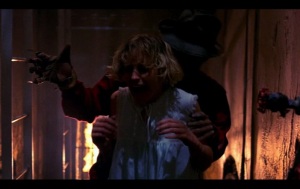 The scariest horror movie of my childhood and frankly an almost traumatic experience. I recently saw it and even though the scare effect is weakened down somewhat, it is still a deeply chilling experience. Master of Horror Wes Craven takes all the terrible emotions the worst nightmares can cause and uses them to maximum effect.

Greatest moment: The protagonist Nancy has a number of terrifying dreams.

Groovy! Comedy and scares are effectively combined in this sequel to Raimi’s classic The Evil Dead*. Yes, it is a sequel, the beginning is just an altered summary of the first flick. Bruce Campbell makes Ash a true horror icon as he chops up his girlfriend and fight his own hand. Slapstick humor and rapid chainsaw action make this a true classic in the genre and Raimi’s best film. They don’t make ‘m like this anymore. Classic.

Greatest moment: In the cellar with sweet Henrietta. Complete madness.

This is it, my all-time favorite horror movie. What makes it so good? It is just a trip to become part of Romero’s apocalyptic zombie world for a couple of hours. When used properly as in Dawn of the Dead, zombies are really a marvelous invention. They can be sad, scary, or comical and at the same time serve as a metaphor for the consumerist society. The shopping mall as a zombie survivor stronghold works incredibly well. The movie features well written characters, appropriately disgusting special make-up effects by Tom Savini and great music. It is the most atmospheric horror film; very rich in ideas and horrific imagery. I love it. 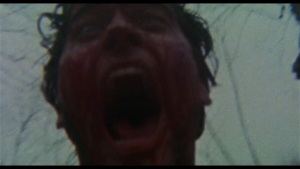 In 1980 three friends went out to shoot a cheap horror movie that was destined to become a genre classic. The handsome one, Bruce Campbell, became the actor of the group. ‘He was the one that girls wanted to look at.’ Sam Raimi later became a top director in Hollywood (directing Spiderman). And finally, Rob Tapert became a successful producer. The Evil Dead is still a very effective horror flick to this day with many unforgettable moments, such as the tree rape scene and blood-soaked finale.

Greatest Moment: The gory climax in the cabin.