Who’s Hunter? Hunter Stockton Thompson (1937 – 2005) was an American journalist and inventor of Gonzo Journalism, a form of New Journalism. His persona and works inspired three Hollywood movies and several documentaries. 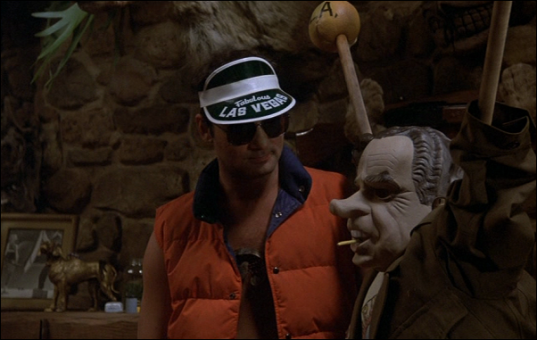 ‘I hate to advocate weird chemicals, alcohol, violence or insanity to anyone, but in my case it’s worked.’

Where the Buffalo Roam is the first movie adaptation of the work of legendary Gonzo journalist Hunter S. Thompson, who is portrayed by Bill Murray in the movie. The story deals with Thompson’s encounters with his equally legendary ‘mutant’ attorney Oscar Zeta Acosta, who is called Carl Lazlo here and is portrayed by Peter Boyle. The movie is based on Thompson’s obituary for his attorney who disappeared in Mexico in 1974, three years after their two trips to Las Vegas that were immortalized in Thompson’s masterpiece Fear and Loathing in Las Vegas.

Screenplay writer John Kaye also drew from other works of Thompson, including Fear and Loathing: On the Campaign Trail 72’ and The Great Shark Hunt. The final result depicts three journalistic adventures of Thompson in which Lazlo shows up. The first one involves San Francisco drug trials in which Lazlo represents wrongfully indicted youngsters. The second story shows Thompson missing the Super Bowl to accompany Lazlo on a failed activist mission. Finally, Thompson is seen on the presidential campaign where he has a one-on-one encounter with his arch enemy Richard Nixon.

Most of the people involved, including Thompson himself, didn’t like the final result or even hated the movie. It is easy to see why. Much of Thompson’s razor sharp journalism resorts into a bunch of silliness. Especially the second half is very uneven. Still, it is a lot of fun hearing a number of great Thompson quotes being uttered by Bill Murray, who’s excellent in the role of Gonzo journalist. Boyle is also enjoyable as his dope crazed attorney.

As a whole, the movie is indeed too silly to be perceived a success or an effective movie translation of Thompson’s writing. However, separate parts range from funny to almost great. Especially the sequences in which Thompson has to meet deadlines, but is too preoccupied with weirdness and dope frenzies. Also includes an excellent soundtrack featuring: Neil Young, Bob Dylan, Jimi Hendrix and Creedence Clearwater Revival.

It is the foul year of our lord 1971 and Gonzo journalist Hunter S. Thompson (Raoul Duke in the story) and his Samoan attorney Dr. Gonzo decide to undertake the ultimate trip of the seventies. The official assignment is to cover the Mint 400 desert race in Las Vegas, but they have something bigger in mind. They want to find the American dream. Armed to the teeth with highly dangerous narcotics, they head out to Las Vegas in their fire red convertible… Some trip it’s gonna be.

While searching for the American dream, Thompson and Dr. Gonzo only find fear and loathing. Intolerable vibrations in a town not at all suitable for the use of psychedelic drugs. The atmosphere is extremely menacing, but as they behave as animals, nobody even notices them. Vegas turns out to be a truly savage town. And while soldiers are dying in Vietnam, used car dealers from Dallas throw their money in the slot machines, Debbie Reynolds sings in the Desert Inn and the national police force meets on a congress about marijuana. Thompson and Dr. Gonzo are there…

Thompson’s novel Fear and Loathing in Las Vegas, that was first published in two parts in Rolling Stone Magazine, became a cultural phenomenon (and my personal favorite book of all time). The movie adaptation by Terry Gilliam is a literal one. Thompson wrote his famous novel Gonzo style, which means the events are told through the eyes and vision of the author who fully participates in the story himself. Since Thompson was heavily under the influence during the writing process, he claims he can’t fully remember which parts truly happened and which ones did not (fully). Therefore this literal adaptation is a highly enjoyable blast, though not always realistic.

There is one downside to director Gilliam’s literal approach. In the novel, all the psychedelic escapades form an integral part of what is obviously a literary masterpiece. In the translation to film however, these escapades sometimes appear to be useless fuckarounds, especially during the final part of the film. However, that is a minor criticism for this is obviously a highly enjoyable movie. Depp and Del Toro are both terrific in their method acting approaches to their roles. Thompson’s poetic writing, beautifully spoken by Depp in voiceover, runs through the movie that captures the era and paranoid nightmare perfectly. Combined with a beautiful seventies soundtrack and Grade A settings, the great time capsule that is Fear and Loathing in Las Vegas is complete. Also, it is one of the funniest movies of all time. So buy the ticket and take the ride.

The title The Rum Diary can mean two things. Hunter S Thompson’s novel that is told in this movie or The San Juan Star, the near bankrupt Puerto Rican newspaper where main character Paul Kemp (Thompson’s alter ego) takes a job as journalist. Why? Because the entire writing staff is completely drunk. The same seems to apply for the whole population of Puerto Rico in the 1960’s, the setting of The Rum Diary.

This is a story about alcohol and lots of it. But, whenever Kemp takes time off of drinking, he engages in a compelling journalistic endeavour, shining light on the culture and problems of the relatively unknown country he resides in. This is also a love story. Kemp falls head over heels for the stunning Chenault, girlfriend of corrupt businessman Sanderson, who wants Kemp to write stories in favour of his unethical real estate plans.

Kemp’s dilemma, going along with the flow or exposing the ‘bastards’ as he puts it, is the backbone of this movie. The pace is as relaxed as the setting and director Robinson succeeds well in translating the mood of Thompson’s novel to the white screen. The cast is on a roll as well. Depp, who once said he would like to play Thompson every few years, is solid as always. He gets excellent comic support from press associates Michael Rispoli, Richard Jenkins and Giovanni Ribisi. Amber Heard and Aaron Eckhart play Chenault and Sanderson, whose characters add the necessary intrigue and substance to the story.

Obviously this is no Fear and Loathing in Las Vegas and the drug fueled craziness portrayed in that movie is largely absent. This is Thompson Light; a smaller movie without too much excessive behavior. Director Robinson did add one pretty funny drug scene that can be considered as a wink to big brother Fear and Loathing. In The Rum Diary, a novel that Thompson wrote many years before his Vegas-masterpiece, the author was still searching for his unique voice and it is pleasant to join him on this quest. It is best to keep some rum within reach though as you might get thirsty underway…

‘The banter went on for a while, then I lashed the wheel so the boat wouldn’t wander and went down for a beer. Captain Steve had crawled into the cabin and passed out on top of the ice locker. Ackerman still looked dead and he seemed to be barely breathing, so I rolled him over on his side and hung a bell around his neck so I could hear him if he started vomiting.’
– The Curse of Lono (1983)

Het boek begint met een brief die Thompson naar zijn maatje Steadman stuurt:
Dear Ralph, I think we have a live one this time, old sport. Some dingbat named Perry up in Oregon wants to give us a month in Hawaii for Christmas and all we have to do is cover the Honolulu Marathon for his magazine, a thing called Running. . . .

‘King Lono was a chronic brawler with an ungovernable temper, a keen eye for the naked side of life and a taste for strong drink at all times…’

• Half pint, 10-inch hypo-needle (the kind used for spinal taps & inoculating bulls).
• Fill this full of rum, tequila or wild turkey & shoot the entire content straight into the stomach, thru the navel. This will induce a fantastic rush – much like a ¾ hour amyl high – plenty of time to read the whole saga. 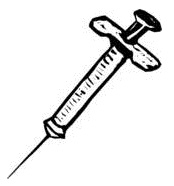 Gonzo Journalism – like quadrophonic 4-dimensional sound – exists on many levels: It is not so much “written” as performed – and because of this, the end result must be experienced. Instead of merely “read.”
Beyond that, it should be experienced under circumstances approximating – as closely as possible – the conditions surrounding the original performance. For this reason, the editors have agreed to pass the author’s “reading instructions” along to all those who might want to “experience” this saga under the “proper conditions.” We offer them without comment – & certainly without recommendation.
To wit: Read straight thru, at high speed, from start to finish, in a large room full of speakers, amplifiers & other appropriate sound equipment. There should also be a large fire in the room, preferably in an open fireplace & raging almost out of control.
(alternative, hot tub & vibrator).
The mind & body must be subjected to extreme stimulus, by means of drugs & music.
– Hunter S. Thompson

‘The nut of the problem is that covering this presidential campaign is so fucking dull that it’s just barely tolerable . . . and the only thing worse than going out on the campaign trail and getting hauled around in a booze-frenzy from one speech to another is having to come back to Washington and write about it.’
– Fear and Loathing: On the Campaign Trail ’72 (1973) 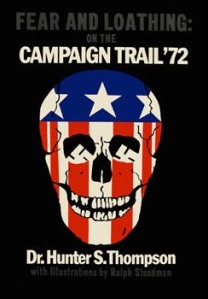 Naarmate de campagne vordert wordt Thompson steeds wanhopiger; ‘I’m beginning to wonder just how much longer I can stand it: this endless nightmare of getting up at the crack of dawn to go out and watch the candidate shake hands with workers coming in for the day shift at the Bilbo Gear and Sprocket Factory, then following him across town for another press-the-flesh gig at the local slaughterhouse… then back on the bus and follow the candidate’s car through traffic for forty-five minutes to watch him eat lunch and chat casually with the folks at a basement cafeteria table in some high-rise Home for the Aged. Only a lunatic would do this kind of work: twenty-three primaries in five months; Stone drunk from dawn till dusk and huge speed-blisters all over my head. Where is the meaning? That light at the end of the tunnel?’

Zijn uiteindelijke analyse van het politieke proces luidt als volgt; ‘We’ve come to a point where every four years the national fever rises up – this hunger for the saviour, the white knight – and whoever wins becomes so immensely powerful, like Nixon is now, that when you vote for President today you’re talking about giving a man dictatorial power for four years. I think it might be better to have the President sort of like the King of England – or the Queen – and have the real business of presidency conducted by . . . a City Manager-type, a Prime Minister, somebody who’s directly answerable to Congress rather than a person who moves all his friends into the White House and does whatever he wants for four years. The whole framework of the presidency is getting out of hand. You almost have to be a rock star to get the kind of fever you need to survive in American politics.’