‘let all the poisons that lurk in the mud hatch out’

Marvellous BBC adaptation of Robert Graves’ novels about the Julio-Claudian dynasty as seen through the eyes of the unlikely emperor Claudius. Not a slight task to transfer this fascinating period of history to the small screen. But they pull it off with some brilliant production design, acting and writing.

Every episode (except for 10) starts with an aged Claudius flashing back in time. From the beginning of the dynasty when Augustus was emperor until the rulership of Tiberius, Caligula, Claudius himself and finally Nero. Brian Blessed stars as Augustus, a decisive emperor with a talent for leadership. His reign takes place in a time of conquest when Rome was still rich and powerful. The scheming wife of Augustus, Claudius’ grandmother Livia, poisons everybody that has a claim on the position of Caesar until the time is right for her son Tiberius to rule. One by one the members of the imperial family are killed off by Livia. All except for Claudius who has a disability, but is held for a much greater fool than he really is.

The cast of this great mini-series is top-notch. Derek Jacobi does a fantastic job as Claudius. A man whose weaker points don’t withhold him from becoming a great leader. Even though it is by a great coincidence that Claudius gets to wear the Caesar robe. Claudius’ rulership follows the horrible reigns of Tiberius (excellent performance from George Baker) and the insane emperor Caligula. The poisonous Livia is portrayed by Siân Phillips, whose evil schemes are a joy to behold. John Hurt gives a terrifying performance as the utter mad Caligula whose very presence is constantly threatening to Claudius and others. By pursuing his mad ideas and his obvious fondness for sadism and incest (he marries his sister Drusilla) he makes an even scarier villain than Livia. There are also early performances from Patrick Stewart and John Rhys-Davies amongst others.

There is quite a lot of violent and sexual content although not everything is explicitly shown. Still for a TV series from the seventies it is quite shocking. Even this day it possesses the power to make some jaws drop observing the extravagance of the old Romans. Being a TV production there was no budget for grand settings à la Spartacus and much of the series plays indoors. Still all the sets look beautiful and give the series something theatrical.

To this day this remains one of finest mini-series ever made. A definite must-see to those who enjoy historic drama, intriguing plots and superb acting. 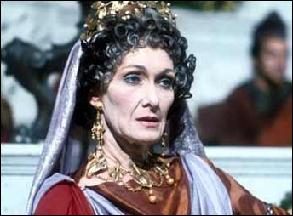