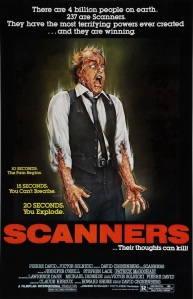 Master of body horror David Cronenberg, moves into the mental domain with this masterful movie. Scanners are telepathic humans who pick up every thought in their surroundings and can ‘scan’ other people.

The drifter Cameron Vale (Stephen Lack) is a scanner who isn’t aware of his condition. He is a victim of it. But under the guidance of scientist Dr. Paul Ruth (Patrick McGoohan) – head of the scanner programme of security company ConSec – he learns to use his gift.

ConSec, like the United States army has done, uses these ‘telepathic curiosities’ to gather information on potential enemies. It goes wrong however, when the psychopathic super-scanner Darryl Revok (a superb Michael Ironside) starts an underground movement of scanners. And they murder anybody who won’t join them on their mission to conquer the world…

Ruth enlists the yet unaffiliated Vale to help him stop the telepathic maniac Revok. Together with Kim Obrist (Jennifer O’Neill), ‘good’ scanner Vale meets on his journey, he goes after Revok and a clash of powerful minds ensues.

Scanners shows once again why Cronenberg is one of the most skillful directors working in this genre. The way he is able to convey a sense of unease and danger with little means is remarkable. And Scanners – which allegedly had a troublesome production history – belongs to his finest works. With brilliant sound design and an extremely memorable ending.

Biography: David Cronenberg (1943, Toronto), also known as the King of Venereal Horror or the Baron of Blood, grew up in Toronto. His father was a journalist and his mother a piano player. Cronenberg graduated from the University of Toronto with a degree in literature after switching from the science department. He then turned to filmmaking and reached a cult status with a few early horror features including Shivers and Rabid. He rapidly became a very popular genre filmmaker and eventually a true auteur, making profound statements on modern humanity and ever-changing society.