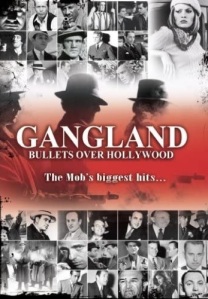 This Hugh Hefner produced documentary shows the fascination of moviegoers with the mob. ‘Once in the racket, always in the racket’, Al Capone said who became the archetype of the gangster and role-model for some legendary movie characters like Caesar ‘Rico’ Bandello (Little Caesar) and Tony Camonte/Montana (Scarface) This also applies to Hollywood when it comes to making gangster films. Every time you think the realms of the genre have been fully explored, some new masterpiece comes along. After the time that Cagney, Robinson and Bogart dominated the screen, a new generation of filmmakers emerged in the seventies with Coppola, Scorsese and De Palma. Then at the brink of the new millennium, the Hollywood gangster legend continued on the small screen with The Sopranos.

Bullets Over Hollywood opens with the very first gangster film: The Musketeers Of Pig Alley, made in 1912. It then goes on to chronologically move through gangster film history right up until The Sopranos. The documentary combines film fragments, interviews and real gangster footage while Paul Sorvino (GoodFellas) provides the narrative. It is an interesting viewing for enthusiasts of the genre, but misses real insight in the works that it covers. Some interesting facts are revealed such as the story that Howard Hawks was forced by Hollywood to add ‘the shame of the nation’ to his gangsterfilm Scarface, because they didn’t want to glorify gangsters. Also interesting is some behind-the-scene footage of gangster classics, but these fragments are unfortunately a little brief. Altogether this is worth a look. If only to hear Leonard Maltin rave about The Godfather and to re-experience some of the finest sequences in the history of this fascinating American phenomenon.